If you’re a foodie restaurateur in a small, seasonal town who’s got a kid with serious food allergies and you want to serve healthy food and specialty items like hard-to-source heirloom purple leaf spinach, what kind of restaurant do you create? I sat down with Ryan McFadden, creator of Simple Eatery in Buena Vista, to find out.

Simple Eatery is the third restaurant McFadden has opened. He is experienced at navigating the waters between his goals of serving quality foods and offering a menu that is enticing enough in the summer that it keeps the lights on through the much slower winter months. This is no easy task.

Simple Eatery is in its second summer of operation. At first, everyone in town went bananas over the frozen yogurt bar, where customers can pile their fro-yo high with all the fixings. A frozen yogurt bar in Buena Vista! It was almost as momentous (and far less controversial) than a second traffic light.

When two more ice cream shops opened shortly after Simple Eatery did, people started to take note of the food. Hey, they serve food here too! And then photographs of their beautiful, almost unfairly photogenic, hamburgers began to circulate on the internet, solidifying their giant, sunny outdoor patio as a mainstay for casual dining on Main Street.

McFadden’s concept is classic dishes made from scratch. He is committed to simplicity. His motto is, “Keep it simple. Do it great.” They even save their veggie scraps for soup stock.

Simple Foods is a casual dining establishment with counter service. The restaurant shares a large, open building with The Trailhead, an outdoor clothing store.

Soon after opening, McFadden felt the push of customer requests for certain (perhaps more sugary) foods than he had originally planned on offering. For example, the fresh, gooey cinnamon bun was not an original menu item. You can thank several persistent customers for changing McFadden’s mind.

The menu features notations for common allergens, so ordering is that much easier for those who need special accommodations. If you are avoiding gluten or simply want more veggies in your meal, ask for the zoodles! Zoodles are spiralized zucchinis and can be substituted for any noodle dish at the cafe, or served sautéed in olive oil and sea salt.

This year, Simple Eatery started bringing fresh bread to the Buena Vista farmers market on Friday afternoons and evenings. With this new exposure, Simple Eatery is now known as much for its fro-yo and fresh food, as it is for its fresh, house-made bread.

Other customer favorites include the organic corn chips with locally made salsa and carrot coconut soup with ginger (dairy-free, gluten-free, vegan, egg-free, soy-free)! Also check out the rainbow trout in sage-cream sauce and seasonal vegetables.

McFadden is not done offering culinary options in Buena Vista, so stay tuned for more fun ideas in the future. 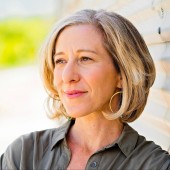 Liz Morgan, NTP, MA is a Nutritional Therapy Practitioner with a nationwide clientele, based in Buena Vista, Colorado. Liz explores the intersection of food, health and sustainability while gently walking her clients down the path toward better health and increased vitality. She loves celebrating delicious, nourishing foods and is always up for a wholesome dinner party. www.lizmorgannutrition.com